Jen ran the Marine Corps Marathon in 2004. A veteran wearing combat boots, smoking a cigarette and carrying a POW flag beat her to the finish line.

Jen, a native of Darlington, Wisconsin, grew up in a family full of public educators, from her parents to a bunch of cousins and in between. She’s a proud alumna of the University of Wisconsin at Madison and received her Master of Social Work from the University of North Carolina at Chapel Hill.

As a Marine spouse, she and her husband and kids moved eight times in 13 years. While stationed in South Carolina she became a licensed registered nurse (she has expired licenses in three states!). 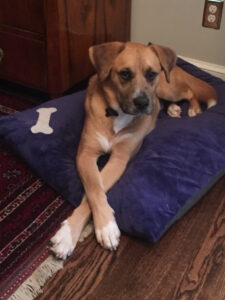 One of her proudest accomplishments is as founder and past-president of the Down Syndrome Network in Onslow and Carteret Counties in Jacksonville, NC. She hosted the inaugural Buddy Walk for Down Syndrome, which is still going on under its third president.

For the past seven years, she and her family have lived in Alexandria. Collectively, her children have attended Charles Barrett, Mount Vernon Community Schools, Cora Kelly and George Washington Middle School.

Jen began subbing for ACPS in 2017, moved fulltime to Charles Barrett in 2018 and served as Safe Routes to School coordinator from 2019 to 2021.

Animals of the Wiser house include Larry the boxer and Frank the hamster. In her free time, Jen enjoys reading, baking, biking, hiking, yoga, pilates, barre, and running the occasional 5k with her family.